Serious Pie & Biscuit is a part of Tom Douglas‘s Seattle restaurant empire. While Seattleites have appreciated his contributions to the local food scene, many grouse about the premium they have to pay at his establishments.

Serious Pie & Biscuit is located in the South Lake Union (SLU) neighborhood (there are other Serious Pie locations near Belltown and Capitol Hill), right next to the Amazon campus. The SLU branch is situated to feed the ravenous life science researchers, college students, and Amazon employees that roll through the region on a daily basis. It was the perfect place for some to-go breakfast on a wet and chilly Sunday morning before a Seahawks game. 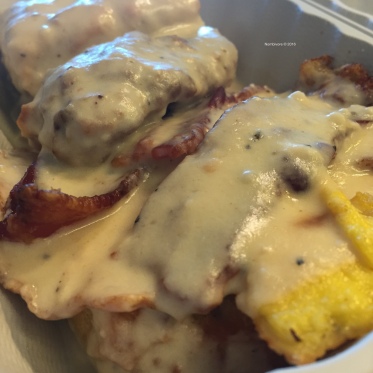 Good, but could have been even better had the gravy been served on the side. The gravy had a strong black pepper flavor with a tailing kick of Tabasco. But given the richness of the other ingredients, the gravy was overkill. The fried egg was disappointing because the yolk hardened from overcooking. Drenched in gravy, it was hard to discern any unique taste or texture from the biscuit. On the plus side, the fried chicken was juicy, and the bacon was thick-cut and a jerky-like texture. 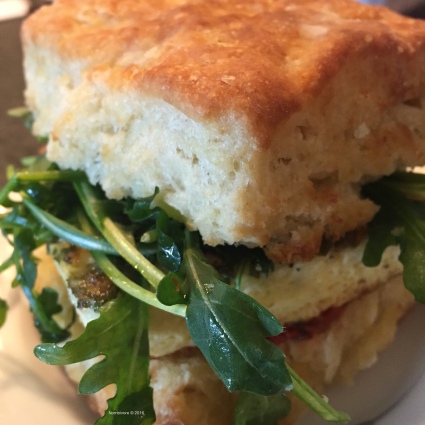 This is more balanced and refined than the Zach. The frittata lacked airiness but had a faint garlic/earthy truffle flavor. The tomatoes and caper provided a good combination of sweetness and brine. The arugula added some herb-like fragrance and contrast in texture. The biscuit was appropriately flaky and fluffy with a good crust on top.

If you intend on dining on site on the weekends, I recommend coming before there is a line during the peak breakfast and brunch hours. The sandwiches are not cheap, but it is very unlikely you will walk away hungry. More than likely, you will want a nap afterwards. Plan accordingly.