Common to other Huxley Wallace restaurants such as Westward and Quality Athletics, the Great State Burger offers a carefully curated dining experience. Emphasizing quality over variety, Great State Burger offers a limited menu focused on burgers. Aesthetically, the place pays homage to old school diners, like an indoor Dick’s Drive-In with a fresh coat of paint and high ceilings.

The menu entirely consists of beef burgers (either with single or double patty), veggie burgers, fries, shakes, soda (Jones instead of the Coke/Pepsi lines), and beer. You can opt for a “Top That” option on the burgers, which gets you grilled onions, picked, and extra sauce for an extra $1.50.

About five to six dollars more than a McDonald’s combo meal, but there is a difference in quality. The beef patties were juicy, with a slight touch of pink in the center. The beef patties had some chew to it, suggesting beef that was not overly processed. The patties also had a strong black pepper taste, similar to Japanese pepper-steak. The State sauce felt like a creamier and blander version of thousand island dressing. 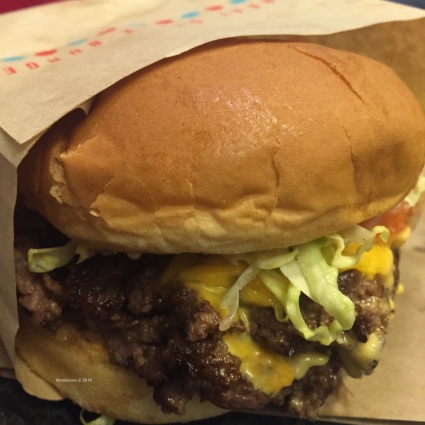 On a separate visit, I ordered one with cheddar cheese and topped with the extra options. This was less preferable because the cheese and extra sauce undermined the pepper flavor from the patties. However, the briny pickles and the caramelized grilled onions were nice touches. 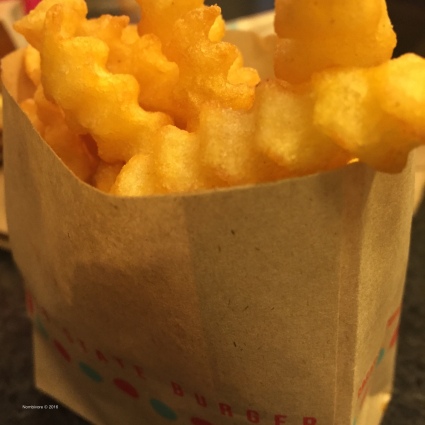 Also, the crinkle-cut fries were excellent. Crispy and golden on the outside, fluffy on the inside, and seasoned with just a right amount of salt. 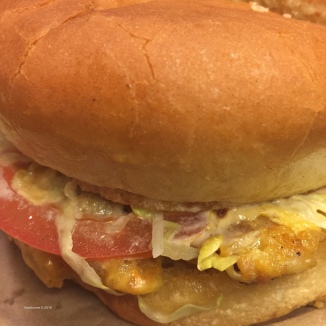 This was disappointing because the grain-and-vegetable patty was completely overwhelmed by the State sauce and the cheese. It would have been nice if they doubled the patty or limited the sauce for balance.

Shakes were made from Parfait organic soft serve. Thick with a very assertive vanilla flavor, this was also good except for being too sweet.

Great State Burger accomplishes the goal of serving burgers made from high quality ingredients at relatively reasonable prices. The place has the goods to grab your attention, even in the increasingly crowded Seattle burger-chain scene (along with Dick’s, Burgermaster, Blue Moon Burgers, Lil’ Woody’s, and Lunchbox Laboratory). Those craving for burgers in downtown Seattle could save a few bucks by going to the McDonald’s just a block away, but splurging for Great State Burger instead would be the wiser option.