The Grand Central Market in downtown Los Angeles rests at the bottom of the famous, but currently decommissioned, Angels Flight funicular railway. And although both are notable 20th century Los Angeles landmarks, the market is open for business while Angels Flight is convalescing back into working order.

Although I used to work in downtown LA, I had no awareness the market until I moved away. Now that I am no longer an LA local, I finally get a chance to visit during a business trip. Anyway, when I arrived on a Saturday morning right as the market opened at 8 a.m., most the stalls were closed.

However, there was already a jovial and eager line snaking around Eggslut. Although I was reluctant to wait, the dreaded fear of missing out gave me the fortitude to endure the wait. Luckily, the line moved at a good pace, and I was ordering before I could finish a Sudoku puzzle on my phone. 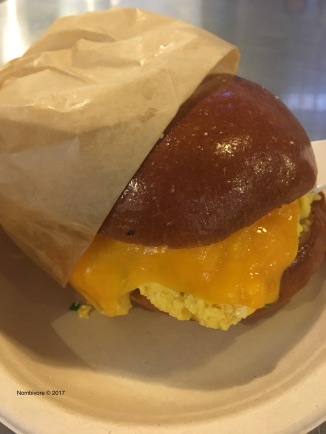 This was just too much of a good thing. The eggs were soft and buttery. Combined with the buttered brioche bun, melted cheddar, and ripe avocado slices, then the whole thing just melted on contacted. The richness overwhelmed the onions and the sriracha. There was nothing to establish a contrast, either in taste or texture. Still, I inhaled the sandwich in about one minute, giving the old ticker some heavy-duty lifting for the rest of the day. Overall, I get Eggslut’s appeal, but the experience was one-note for me. I would like to try it again some other time.